In 1882 the city council was proud that Bénodet “was a resort with a greater number of tourists every year”. Meanwhile, the town of Perguet officially became Bénodet (in 1878) and a nice 24-rooms hotel opened (around 1880) next to the church, it was one of the first in Cornwall. In its 1883 edition, the Joanne-Hachette guide (replaced by the Guides Bleus) published an add saying: “Modest price, lunch: 2F, dinner: 2.5F, with wine, oysters from the Hotel’s farm, nice hike around, sea and river cruises”.

The fine establishment, also called Hamon Hotel or Le Clinche Hotel, was operated by Thomas Hamon and his wife Marie-Josèphe Le Clinche. But Anne-Marie Le Clinche (born Divanac’h) is the one who started the business, renting furnished flats to captains in port, having the Grand Hotel built between 1875 and 1880. It’s said here, and in a poem from Frederic Le Guyader – who came often to visit his sister, the first “post office lady” – that:

“The divine Sarah [Bernhardt] stayed there for a long time.

Glowing I saw her, once

In a white peplum draping her queenly”

The famous comedian would have stayed in Bénodet around 1883, just before she settled in the Pointe des Poulains in Belle-Île.

Marcel Proust never stayed in Bénodet but on vacation in Beg-Meil in September 1895 with his friend Reynaldo Hahn, he probably came by on his way to Penmarc’h. Hence this poetic reference in Du côté de chez Swann: “Bénodet, name barely berthed the river seems to try dragging into the seaweeds.”

By the end of the century, the Hamon-Le Clinches sold the Grand Hotel to Cristophe de Cheffontaines, owner of the castle named after him in Clohars-Fouesnant, and who rent it to Joseph Boissel tenant of the Arvor Hotel in Fouesnant. Boissel became the owner after the Marquis died in 1921.

Across the street, clients enjoy the terraces, called “vide-bouteilles” (siphons), with a panoramic view over the river and the life of commercial port, full with pine wood and sea fertilizer. Between WW I and WWII, due to its success, the hotel enlarged the terraces in 1923 and built two extra floors in 1927. Until 1988, The Grand Hotel is held by Joseph’s son and his sister Annie BOISSEL, Jean BOISSEL (1907-1995) who animated the tourist information bureau for 34 years, and initiated the Departmental Committee for Tourism and promoted and funded the Museum of Sea Shore.

Then, the Grand Hotel kept his first mission under a new brand: l’Abbatiale! 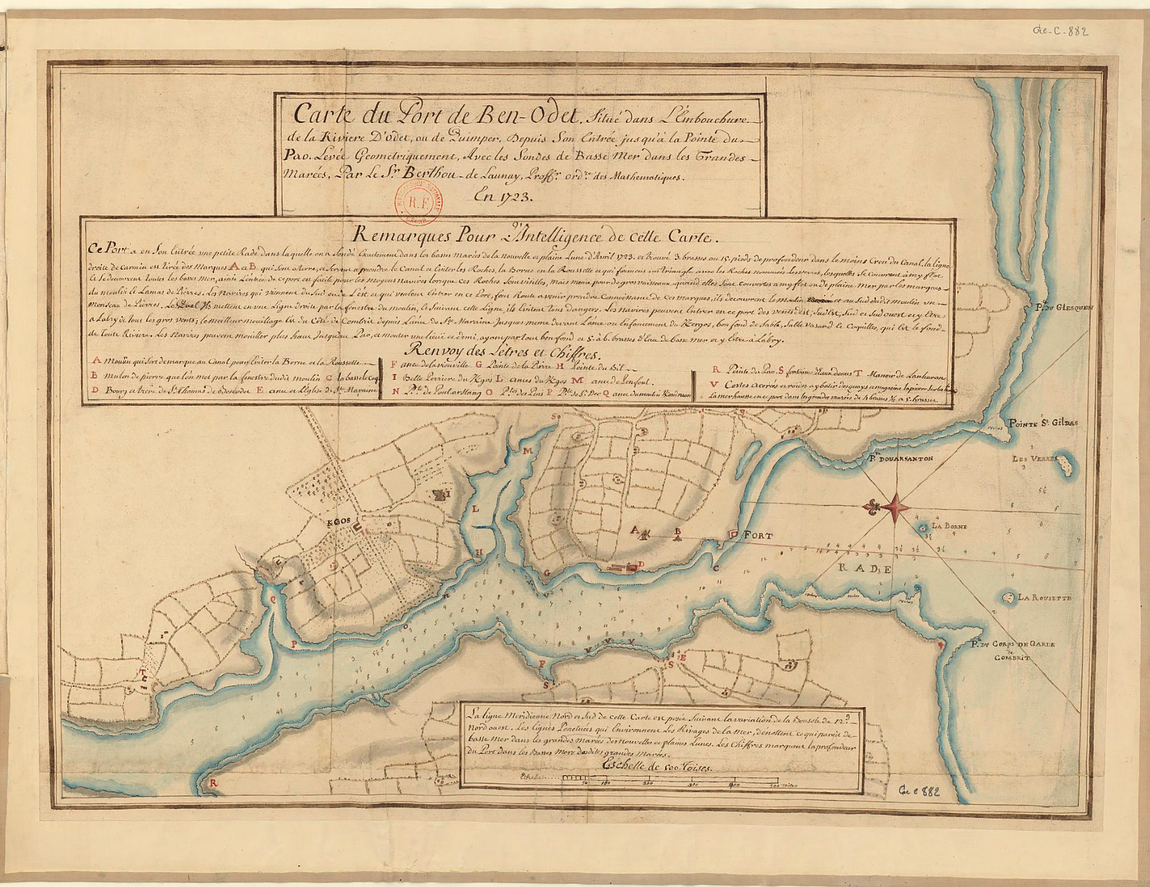 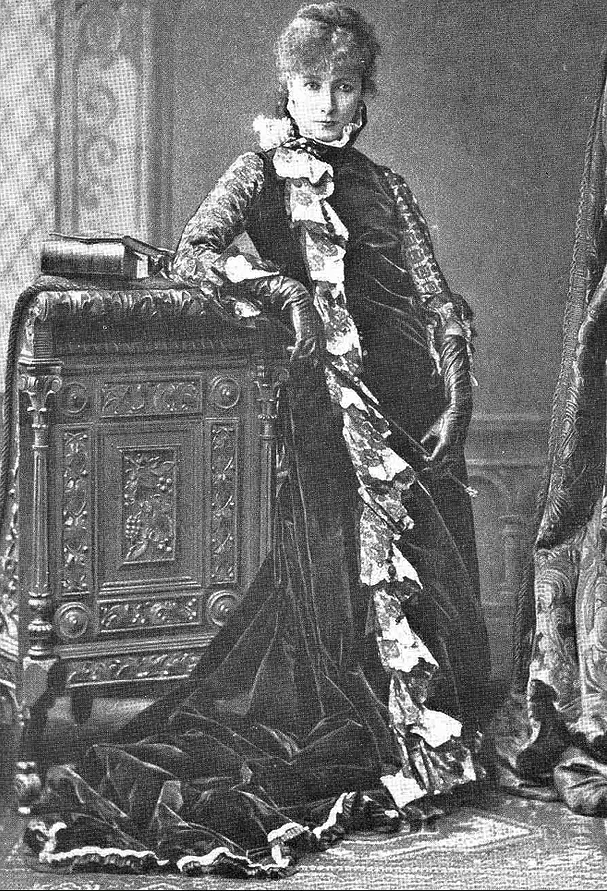 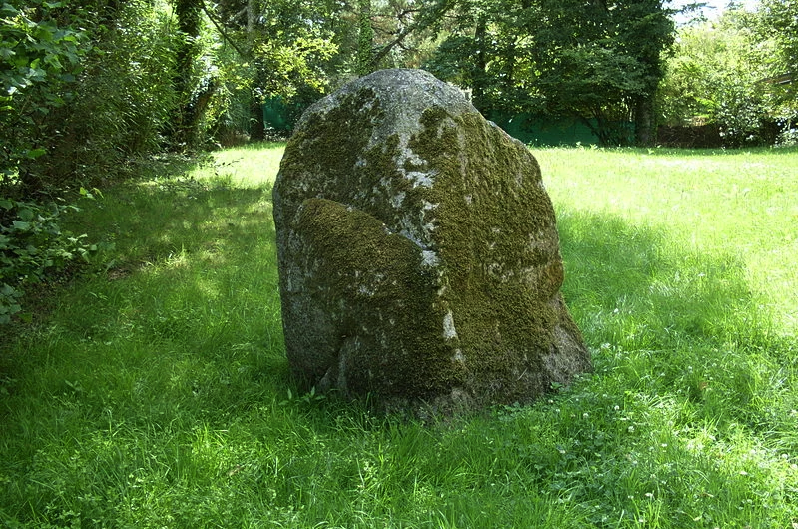 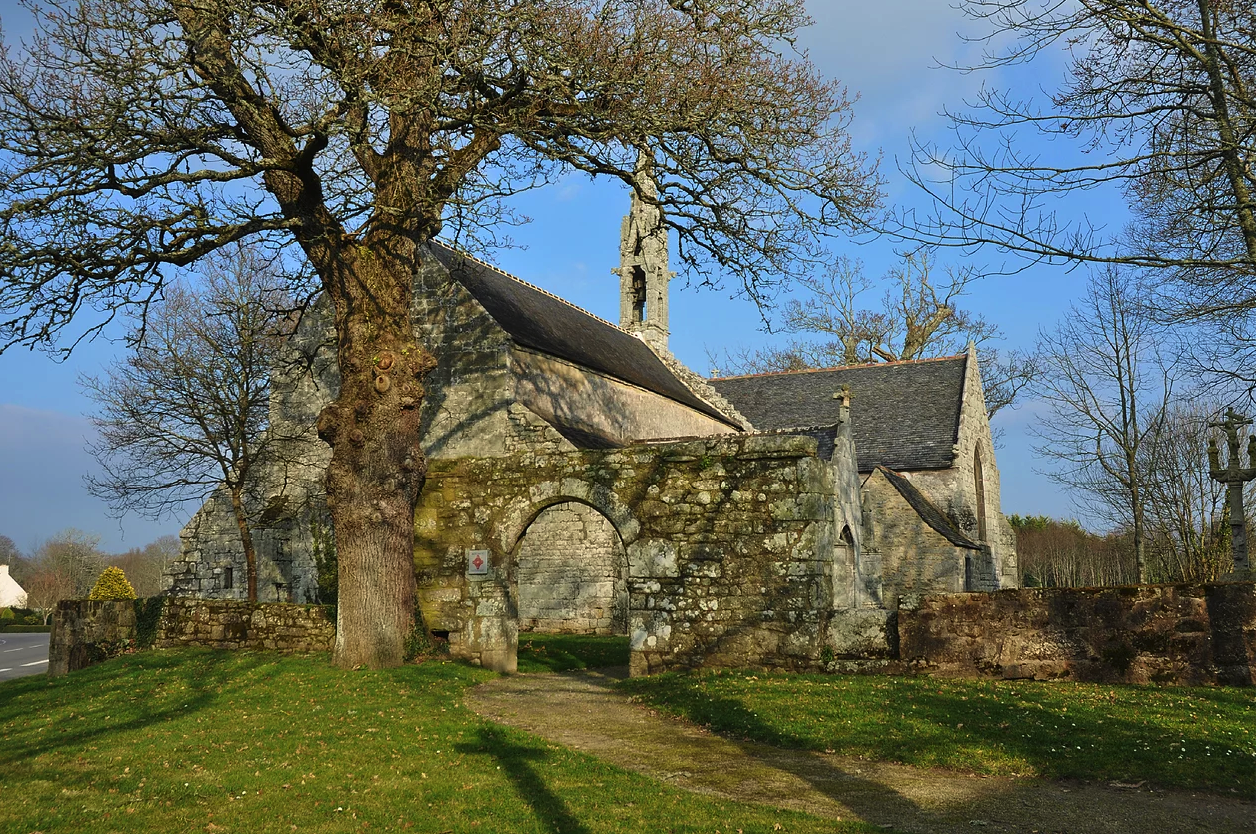 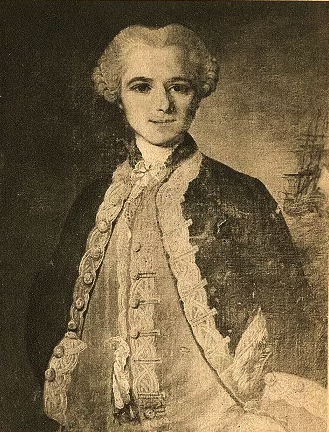 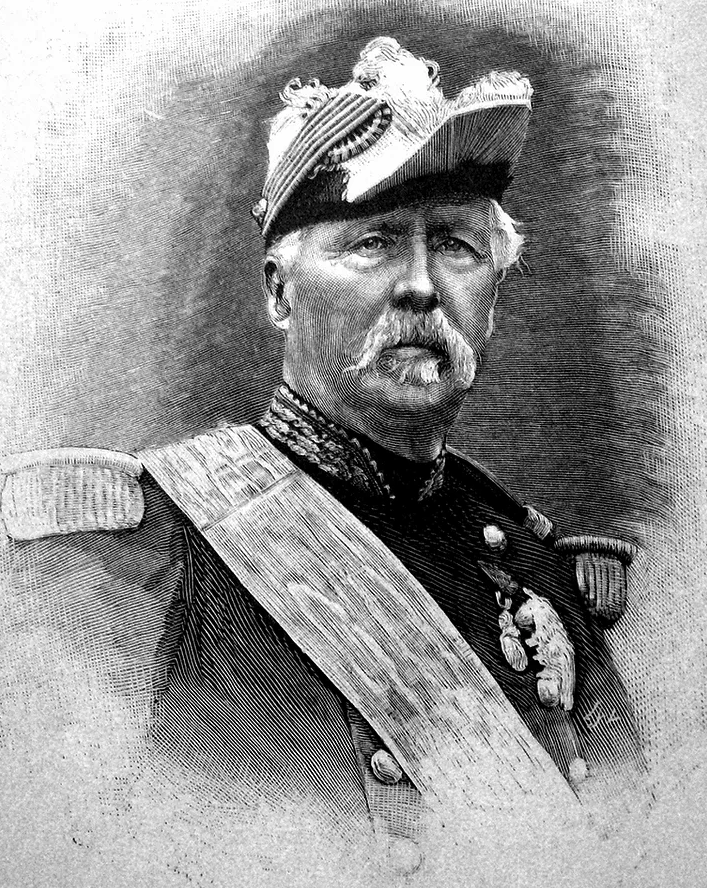 Bénodet is one of the most famous port town in the region – and has been for the last 100 years!

Benn Odet, or Penn Odet etymologically means “the head of Odet” for Breton people, a people of sailors who see the mouth of a river as its beginning, whereas people in the lands see it as its end. Same thing for the name of our department: “Finistère” means “fin de la Terre” (end of the Land) for some and “Penn ar Bed” (Head of the Land) for others.

The mouth of the Odet River being in a protected bay with a deep draught makes Bénodet an exceptionally good place for travelers and sailors. A lot of them could leave a mark of their visit.

From prehistoric times, there is nothing left but a menhir in Bénodet; as our ancestors put it in the bottom of a valley, close to the farm of Kérambechennec, few know about it… Even though it’s 2.50m high.

Romans loved the Odet, especially its mouth and settled there: a treasure of 80 gold coins was found in 1860 during the building of the fort and dated their occupation around the 3rd and 4th centuries. Unfortunately, the huge thermal building found in 1870 during archeological digs in the Poulker, did not stand the test of time. There was 13 rooms separated by narrow corridors. Two hearths heated the whole structure; temperature in the rooms depended on the distance from the hearth. There you could have a bath of warm water or steam. Was it the beginning of thalassotherapy? Close to the Poulker as well, at the Pointe Saint-Gildas, a Gallo-Roman cemetery with around twenty graves was found in 1922. Everything was destroyed.

Let’s skip a few centuries until the 12th, the time during which the church of Perguet, dedicated to Sainte-Brigitte (Berc’het in Breton) was built. It probably replaced a more ancient building.

Besides the town center church dedicated to Saint Thomas of Canterbury and built in 1232, the
13th century brought to Bénodet prosperity; the port equipped 10 ships at that time, which transported dried congers and hakes to Royan: there they were processed into some pâté Bordeaux people loved! Coming back, ships would bring wine, salt and grape.

The port gained prosperity throughout the following centuries: out of 121 ships identified in La Rochelle in the middle of the 16th century, 12 were from Bénodet, who was then both sides of the river: they loaded up wine they transported up to the Channel coasts and even further. This activity declined due to British and Dutch competition.

In the 17th century, The Company of Estern India looked for a port to ship their Oriental cargos to and thought about Bénodet, because of its deep draught. Plans are drafted… But it’s in the mouth of the Blavet and Scorf rivers that the port of “the Orient” is built (Lorient).

During the 18th century, the counter admiral Yves de Kerguélen looked at the Bénodet Bay and the River “to receive the Navy vessels”. He sent a memo to First Minister Choiseul but it never succeeded because he ended up in disgrace in 1770.

The French Revolution did not get to Bénodet, a little village of Perguet at that time. Bénodet population gradually increased, the River facilitating business opportunities; there was a lack of sources though. The only drinking water outlet was in the current street of Haute-Fontaine and was overrun at every big tide!

On March 15th, 1878, Perguet became Bénodet by a decree of the Marshal Mac Mahon, President of the French Republic, making official a decision taken by the city council on May 28th, 1877.

Throughout the 20th century, the importance of the commercial port decreased and Bénodet never was a big fishing port.

Since the Second Empire, wealthy people looking for a holiday resort were attracted to Bénodet and the first elegant houses were built close to the port.

In 1863, the new railway to Quimper increased the growth of Bénodet and since 1870, a new clientele, used to sea water baths, started to come to Bénodet. The 1875 nautical event was in a way the official beginning of the resort. The spa tourism was then part of the history of Bénodet as well as fishing and agriculture.

The town center, concentrated around the port then started to expand until today. Big properties, villas were built along the River and some are listed as Heritage Sites!

Even though the first lodge opened in the early 19th century and was held by the Le Clinche’s family, other were built at the end of the century, facing the beaches or the river, the most famous being “Le Grand Hotel” where artists, writers and yachtsmen (mainly British) stayed. In the early 20th century, tourism activities were booming and have kept increasing since then what gave Bénodet its fame as a sea resort.

Nowadays, Bénodet is a high rated Resort. The town motto is “Bénodet, good idea!” (“Bénodet, bonne idée!”) to what was recently added “The 5 stars resort” (“La station 5 étoiles”). Bénodet is now part of the Breton Riviera, new name of this touristic area, including Fouesnant and La Forest-Fouesnant.